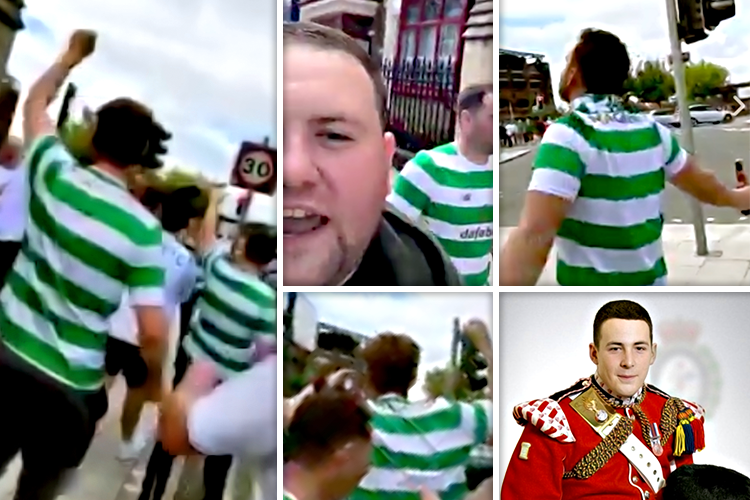 Rigby was beheaded by two Daesh supporters back in 2013 so the pro-Irish fans sang in support of the IRA.

Many condemned the sick songs when the clips made the rounds online ahead of the pre-season game against Sunderland. Celtic won the friendly 5-0 but the game was marred by fighting among the fans. The fans who are believed to have been drunk sang the song, alluding to his military job.

Rigby was a corporal, drumming and handling the machine gun in the Royal Regiment of Fusiliers. The 25-year old was murdered by Michael Adebolajo and Michael Adebowale in the streets of south east London. The killers claimed they were avenging Muslims. Subsequent report shows that M15 and M16 could have done better in handling the potential danger. END_OF_DOCUMENT_TOKEN_TO_BE_REPLACED

Celtic manager Brendan Rodgers is determined to improve the Celtic team and said that he is prepared to break the club’s transfer records if ever the right opportunity presents himself.

He believes that the club already has some good players but that they need to add quality over quantity this season.

Rodgers believes that Celtic has nothing to prove in the Scottish league and that they must now turn their objectives to Europe. He said that he wants to build a team that will allow them to compete with the best teams in Europe and for that, he will need to add quality players.

It is reported that the club might be interested in Manchester United player Adnan Januzaj. Rodgers has refused to comment on these rumors, but he might be the kind of player that Celtic needs in order to progress. END_OF_DOCUMENT_TOKEN_TO_BE_REPLACED

MoussaDembele has recently been making waves as the 20 year old French forward is the top goal-scorer of Celtic FC after scoring 17 goals in 27 league matches. He signed with Celtic FC back on June of 2016 and so far has been one of the most impressive players not only in Celtic FC but also in Scotland.

Celtic FC were fairly lucky when they signed Dembele as there were a few top English Premier League clubs that were attempting to secure the services of the French player but failed to do so.

Arsenal, Liverpool, West Ham United and Chelsea have all showed interest in signing MoussaDembele but it’s believed that the 20 year old rising star has rejected offers from many of those clubs and decided to sign and keep on performing with Celtic FC for the simple fact that his chances of performing in the first team of the Scottish club are much higher in comparison to the other clubs.

During the upcoming summer transfer window, even more clubs are expected to enter the race of signing MoussaDembele as Juventus and Real Madrid are believed to be the latest clubs interested in securing the services of the young star who is running rampant in Scotland.

Brendan Rodgers is hoping that MoussaDembele will decide to stay with Celtic FC for a few more seasons but it might be a difficult task for the Scottish club to keep hold of Dembele as there are so many interested clubs that huge offers are probably going to be launched towards the young player in attempt to lure him away from Celtic FC.

Celtic are looking to equal a 50-year old record for the longest unbeaten run.

To achieve this, they will need to avoid defeat for another match. This is why their next game against St Johnstone might prove to be crucial for them.

Celtic manager Brendan Rodgers said that he had not paid any particular attention to this record and that he is more focused on winning games. He admitted that it would be a great joy for him to help the current Celtic team emulate a team that has brought so much pride in the past. There have been speculations that Gerrard would move to Celtic after the midfielder confirmed that he would exit Los Angeles Galaxy after his current deal. Rodgers and Gerrard worked together for three years at Anfield. As a return to Liverpool is not on the table, the next natural link was rejoining Rodgers if the player did not want to hang up his boots just yet.

Aside Celtic, bookies say Newcastle also stand a chance of luring the ex Three Lions player as they fight for a promotion to top flight English football.

“I never speculate or speak about players coming into the club. I never have done and don’t intend to start now – that will always remain private. The only thing I would say with regards to Steven, has been an incredible player. I had him for a number of years at Liverpool and he was absolutely brilliant with me,” Rodgers said.

Rodgers spoke of the warm reception when he took over at the Merseyside. He refused to comment if Gerrard would move to the Scottish Premier League. END_OF_DOCUMENT_TOKEN_TO_BE_REPLACED

Celtic manager Brendan Rodgers has stated that the club has improved under him and that they will become better. He said that this was shown in the manner they beat Rangers and believe that the club is going from strength to strength.

Brendan Rodgers said that the performance against Rangers showed that the club is progressing well and that fans should expect a good season.

He stated that even if the score was less than the emphatic 5-1 he believes that Celtic played better in the match. He said that they have better control of the game and that they created more occasions than in the first match.

Brendan Rodgers stated that he has seen his side progressed well since his arrival and believed that Celtic is on the rise. He stated that fans are already seeing the difference and he believes that there is still more to come.

He believes that the progression is also seen in the way Celtic is performing in the Champions League and believes that the club has a chance of going to the next round. He said that his players are following his instructions well and that they are making good progress in the training grounds. END_OF_DOCUMENT_TOKEN_TO_BE_REPLACED