The former coach of Celtic FC, Neil Lennon never really had big plans for the 20 year old striker Tony Watt who recently returned from Belgium after going through a loan deal with Lierse SK where he managed to score 8 goals in 17 appearances but it seems like his future will be in Belgium as a deal is expected to be completed within the next few days with Celtic FC allowing the young attacker to be sold to the Belgium side Standard Liege with a price tag of €1.2 million.

If all the reports and rumors are actually true and a transfer does happen then Tony Watt will be making his move to Standard Liege in a contract that lasts 5 years. Tony Watt was at the center of the spotlight in newspaper and websites all over the world back in November of 2012 when he scored a goal during Celtic’s Champions League victory against Barcelona but after that, Watt started to fade away as he could not score a goal for the remainder of the season.

Efe Ambrose is another player from the squad of Celtic that is on the verge of moving on from the team and join a different club in this summer transfer window as the Nigerian defender made a number of fairly decent performances for his country during the 2014 World Cup and he has attracted the interest of the recently promoted Premier League side Burnley. 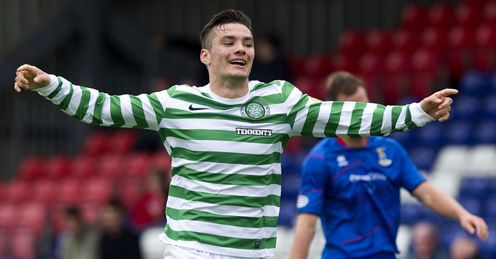 The head coach of Burnley, Sean Dyche has already fortified the midfield and attacking divisions of his team by signing Matthew Taylor, Marvin Sordell and Lukas Jutkiewicz (click here to see more on these three) but the tactician wants to bring in a solid figure that can play an important role in the heart of the defence and he is setting his sights on Celtic’s Efe Ambrose.